“This was our seventh consecutive quarter of generating free cash flow while executing our disciplined plans and delivering on our targets,” said Ryan Lance, chairman and chief executive officer. “Over that time frame we fully funded our capital expenditures, dividends and buybacks within cash from operations. ConocoPhillips has embraced an approach to our cyclical industry that we believe will deliver superior returns and create value across a range of commodity prices. This quarter represents a continuation of strong performance on our business model that prioritizes financial returns, discipline, resilience with upside and shareholder distributions. At our Analyst & Investor Meeting in November we will lay out a plan that demonstrates our ability to successfully perform on this model for the long term.”

Production excluding Libya for the second quarter of 2019 was 1,290 thousand barrels of oil equivalent per day (MBOED), an increase of 79 MBOED compared with the same period a year ago. Excluding a net benefit of 27 MBOED from acquisitions and dispositions (A&D), production increased by 52 MBOED primarily due to growth from the Big 3 unconventionals, development programs and major projects in Alaska, Europe and Asia Pacific. This growth more than offset normal field decline and downtime from planned turnarounds. Production from Libya was 42 MBOED.

In Alaska, the winter exploration program was completed with encouraging results on the Greater Willow Area and Narwhal appraisal tests. In the Lower 48, ramp-up from the Big 3 unconventionals was accelerated, increasing production for the quarter to 367 MBOED. In Canada, completion operations on the 14-well Montney pad and infrastructure construction progressed as planned with startup on track for the fourth quarter. Turnarounds were successfully completed during the quarter primarily at Greater Ekofisk in Norway, Surmont in Canada and Prudhoe Bay in Alaska. Additional turnarounds and maintenance will continue in the third quarter.

Earnings were lower compared with the second quarter of 2018 primarily due to lower realized prices and a lower unrealized gain on our Cenovus Energy equity, partially offset by higher volumes and a financial tax benefit related to the planned U.K. disposition. Excluding special items, adjusted earnings were lower compared with second-quarter 2018 due to lower realized prices, partially offset by higher volumes. Sales volumes for the quarter were lower than production, reducing earnings by $32 million. The company’s total realized price was $50.50 per barrel of oil equivalent (BOE), compared with $54.32 per BOE in the second quarter of 2018, reflecting the impact of lower marker prices.

For the quarter, cash provided by operating activities was $2.9 billion. Excluding a $0.5 billion change in operating working capital, ConocoPhillips generated $3.4 billion in cash from operations (CFO), which included approximately $0.3 billion from APLNG distributions and $0.1 billion from the PDVSA ICC settlement. In addition, the company generated $0.6 billion in disposition proceeds. The company incurred $1.7 billion in capital expenditures and investments that included approximately $0.1 billion of Lower 48 bolt-on acquisitions, repurchased $1.2 billion in shares and paid $0.3 billion in dividends, all entirely funded by CFO.

Production excluding Libya for the first six months of 2019 was 1,303 MBOED, an 87 MBOED increase from 1,216 MBOED for the same period in 2018. Excluding a net A&D benefit of 28 MBOED, production increased 59 MBOED, or 5 percent, largely driven by growth from the Big 3 unconventionals, development programs and major projects, more than offsetting normal field decline and higher planned downtime.

The company’s total realized price during this period was $50.55 per BOE, compared with $52.37 per BOE in the first six months of 2018. This reduction reflected lower crude, natural gas liquids and natural gas prices, partially offset by higher bitumen and liquefied natural gas prices.

In the first half of 2019, cash provided by operating activities was $5.8 billion. Excluding a $0.6 billion change in operating working capital, ConocoPhillips generated $6.4 billion in CFO, exceeding the total of $3.4 billion in capital expenditures and investments, $2.0 billion in share repurchases and $0.7 billion in dividends. In addition, the company generated $0.7 billion in disposition proceeds. Capital expenditures and investments included approximately $0.1 billion primarily for Lower 48 bolt-on acquisitions.

Operating plan capital is now expected to be $6.3 billion versus $6.1 billion, attributable to additional exploration and appraisal drilling in Alaska and the addition of a drilling rig in the Eagle Ford Field at mid-year. This guidance excludes approximately $0.3 billion for opportunistic acquisitions completed or announced. Guidance also excludes obligations under the recently announced production sharing contract extension awarded by the Government of Indonesia.

Third-quarter 2019 production is expected to be 1,290 to 1,330 MBOED, reflecting planned turnarounds in Alaska, Europe and Asia Pacific. Full-year production guidance is 1,310 to 1,340 MBOED. The guidance excludes Libya.

Guidance for capital expenditures, production and adjusted operating cost will be updated upon completion of the planned U.K. disposition.

ConocoPhillips will host a conference call today at 12:00 p.m. EDT to discuss this announcement. To listen to the call, as well as view related presentation materials and supplemental information, go to www.conocophillips.com/investor.

ConocoPhillips will hold an Analyst & Investor Meeting in Houston on Tuesday, Nov. 19 to outline the company’s 10-year operating plan and strategy for long-term value creation. Further information will be available on the company’s website as the date approaches.

ConocoPhillips is the world’s largest independent E&P company based on production and proved reserves. Headquartered in Houston, Texas, ConocoPhillips had operations and activities in 17 countries, $71 billion of total assets, and approximately 10,900 employees as of June 30, 2019. Production excluding Libya averaged 1,303 MBOED for the six months ended June 30, 2019, and proved reserves were 5.3 BBOE as of Dec. 31, 2018. For more information, go to www.conocophillips.com.

This news release contains forward-looking statements. Forward-looking statements relate to future events and anticipated results of operations, business strategies, and other aspects of our operations or operating results. In many cases you can identify forward-looking statements by terminology such as "anticipate," "estimate," "believe," "continue," "could," "intend," "may," "plan," "potential," "predict," "should," "will," "expect," "objective," "projection," "forecast," "goal," "guidance," "outlook," "effort," "on track," "target" and other similar words. However, the absence of these words does not mean that the statements are not forward-looking. Where, in any forward-looking statement, the company expresses an expectation or belief as to future results, such expectation or belief is expressed in good faith and believed to have a reasonable basis. However, there can be no assurance that such expectation or belief will result or be achieved. The actual results of operations can and will be affected by a variety of risks and other matters including, but not limited to changes in commodity prices; changes in expected levels of oil and gas reserves or production; operating hazards, drilling risks, unsuccessful exploratory activities; difficulties in developing new products and manufacturing processes; unexpected cost increases or technical difficulties in constructing, maintaining, or modifying company facilities; legislative and regulatory initiatives addressing global climate change or other environmental concerns; investment in and development of competing or alternative energy sources; disruptions or interruptions impacting the transportation for our oil and gas production; international monetary conditions and exchange rate fluctuations; changes in international trade relationships, including the imposition of trade restrictions or tariffs on any materials or products (such as aluminum and steel) used in the operation of our business; our ability to collect payments when due under our settlement agreement with PDVSA; our ability to collect payments from the government of Venezuela as ordered by the ICSID; our ability to liquidate the common stock issued to us by Cenovus Energy Inc. at prices we deem acceptable, or at all; our ability to complete our announced dispositions or acquisitions on the timeline currently anticipated, if at all; the possibility that regulatory approvals for our announced dispositions or acquisitions will not be received on a timely basis, if at all, or that such approvals may require modification to the terms of our announced dispositions, acquisitions or our remaining business; business disruptions during or following our announced dispositions or acquisitions, including the diversion of management time and attention; the ability to deploy net proceeds from our announced dispositions in the manner and timeframe we currently anticipate, if at all;our ability to develop our portfolio within expected capital levels; potential liability for remedial actions under existing or future environmental regulations; potential liability resulting from pending or future litigation; the impact of competition and consolidation in the oil and gas industry; limited access to capital or significantly higher cost of capital related to illiquidity or uncertainty in the domestic or international financial markets; general domestic and international economic and political conditions; changes in tax, environmental and other laws applicable to our business; and disruptions resulting from extraordinary weather events, civil unrest, war, terrorism or cyber attack. Other factors that could cause actual results to differ materially from those described in the forward-looking statements include other economic, business, competitive and/or regulatory factors affecting our business generally as set forth in our filings with the Securities and Exchange Commission (SEC). Unless legally required, ConocoPhillips undertakes no obligation to update publicly any forward-looking statements, whether as a result of new information, future events or otherwise.

Use of Non-GAAP Financial Information–To supplement the presentation of the company’s financial results prepared in accordance with U.S. generally accepted accounting principles (GAAP), this news release and the accompanying supplemental financial information contain certain financial measures that are not prepared in accordance with GAAP, including adjusted earnings (calculated on a consolidated and on a segment-level basis), adjusted earnings per share, cash from operations (CFO) and free cash flow.

Reconciliations of each non-GAAP measure presented in this news release to the most directly comparable financial measure calculated in accordance with GAAP are included in the release.

References in the release to earnings refer to net income/(loss) attributable to ConocoPhillips. 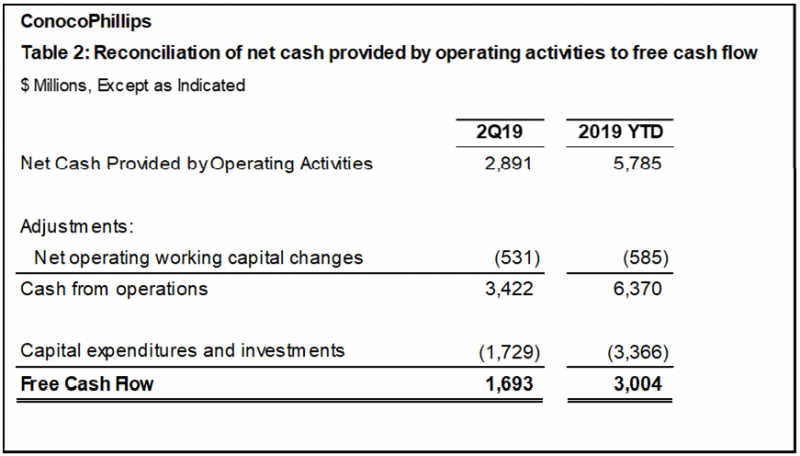